The Cunliffe family sold the land upon which the school sits at the end of the 19th century . The land was to be used “for educational purposes” and several covenants to this effect remain in force to this day.

The idea of a separate school for girls was first mooted at the start of the 20th century, when the number of pupils at the Grove Park Boys School (across the road) increased, after girls were allowed to attend for the first time. Three concept plans for the new girls school were originally drawn up in 1914 by the County Architect and Surveyor at the time, Walter Douglas Wiles. Two of the plans "Schemes B" and "C", placed the new school at a 45 degree angle to Chester Road. "Scheme A" placed the new building in the location it is found today. 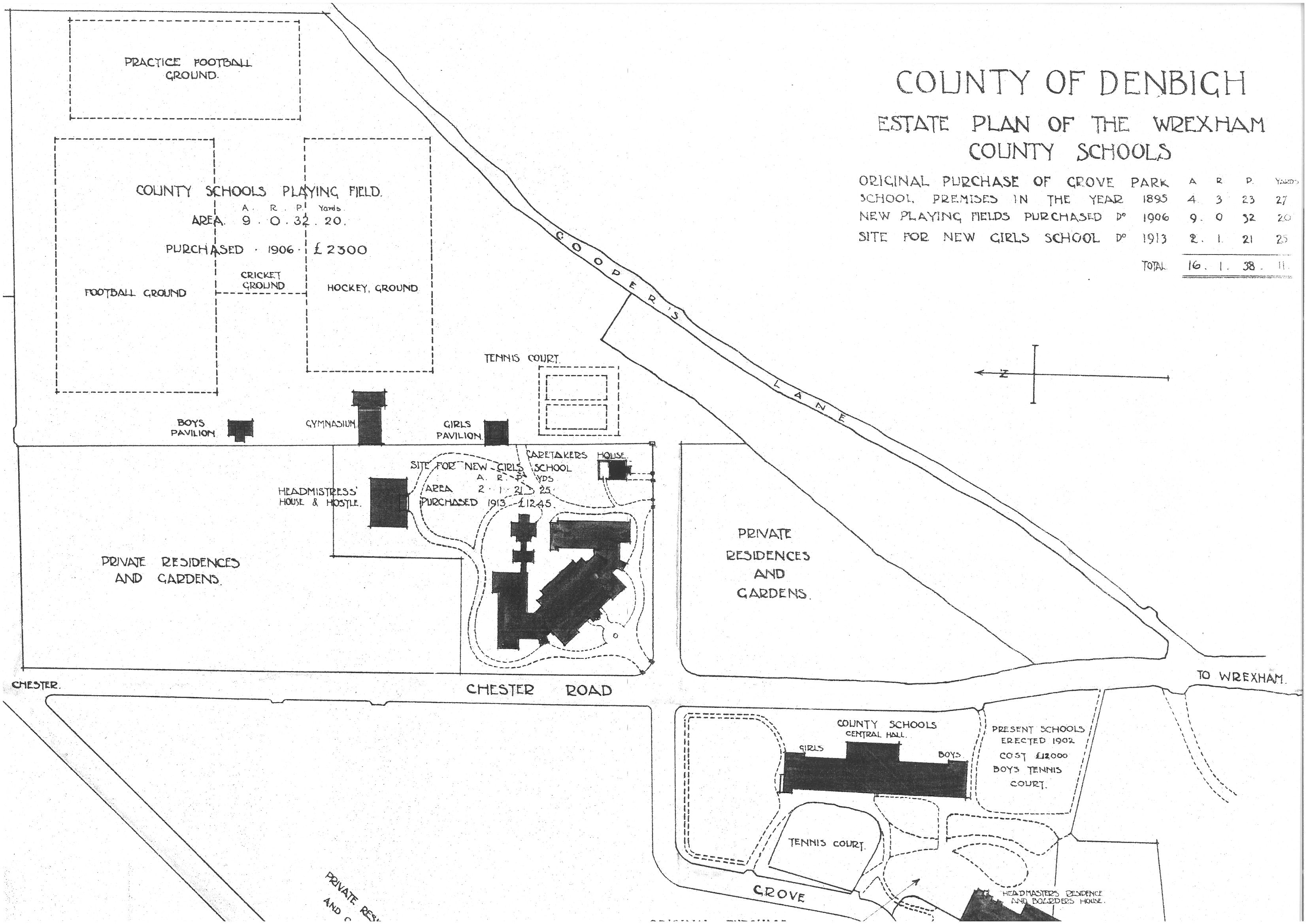 Walter Wiles had the site levelled, and in his letter to the Chairman and Governors, he describes why he himself preferred "Scheme C". He also details why the building should be dressed with Cefn stone, to be in harmony with the existing boys school. A copy of this letter can be viewed here. The ground floor plan for Scheme C can be viewed here.

Unfortunately, due to the First World War, the construction of the school was delayed.

At a Governors Meeting in February 1919, a motion was carried to form a committee which would take immediate steps to provide a new girls school for 500 students. To cope with the increased number of students at the boys school, it was decided to secure one or two army huts for use as temporary classrooms.

Walter D Wiles retired in 1926, and his son, Gilbert Douglas Wiles took over as County Architect. Gilbert was to see his fathers design to fruition, after the school was finally given the go ahead in the early 1930's. 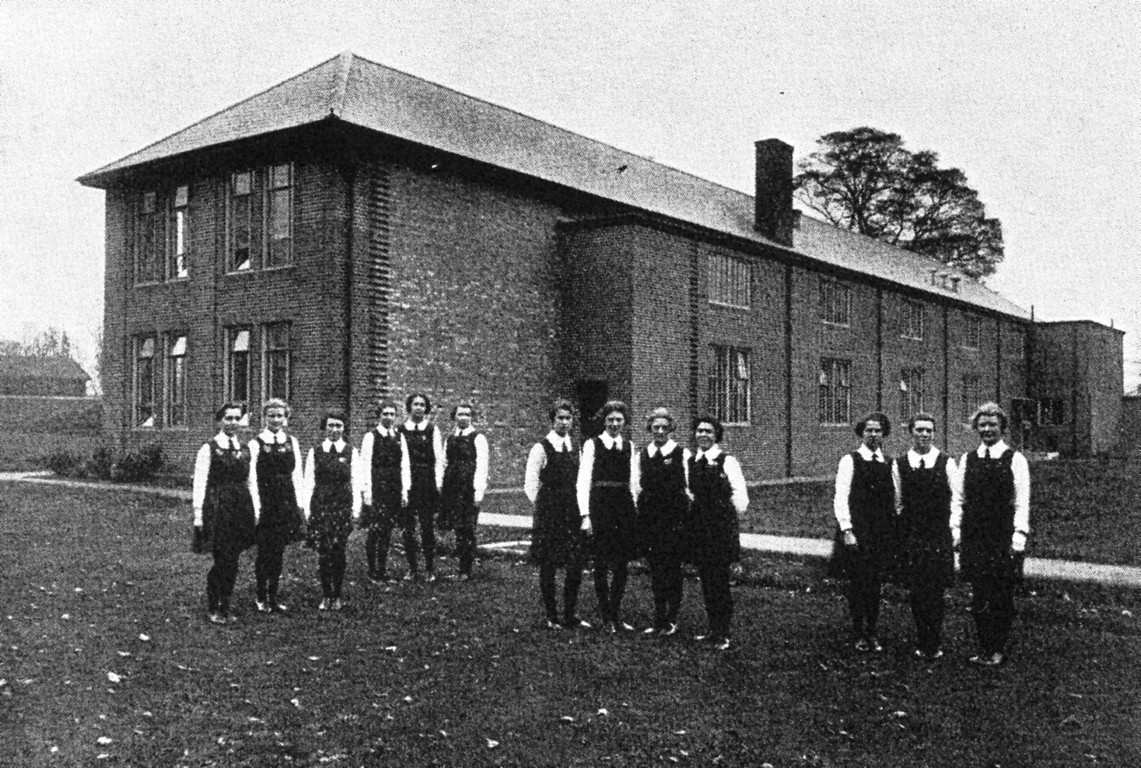 On 1st June 1938, the Chairman of the Governors, William Thomas J.P laid the foundation stone for the rest of the school. The school was completed in time for the first admissions in September 1939. This second part of the build cost £33294 (or £2 million using 2014 RPI figures)! 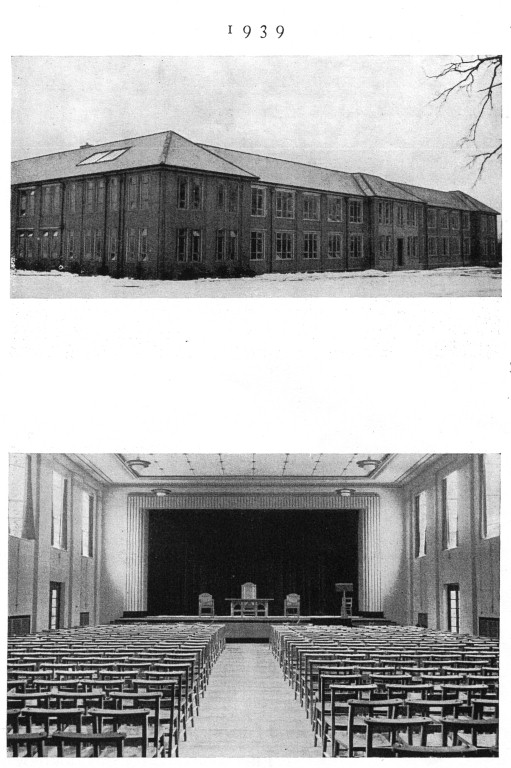 The school was officially opened on the 22nd February 1940 by the Rt Honourable Earl de la Warr, President of the Board of Education. In the first year, the school had 577 girls on its register. Alicia Gower-Jones, the first head mistress, commented at the opening, that this was “the only grammar school built between the two wars”.

Unfortunately, Walter Wiles died in June 1940 at the age of 74, but he must have been very pleased to see his original designs for the school brought to life. One wonders whether Gilbert would have asked his father for advice interpreting the original plans, as no doubt, even in retirement, Walter would want to be involved in the project. Walter lived not far from the school, on Rhosnessni Lane, whilst his son Gilbert, lived on Chester Road, towards Garden Village.

The building was designed with art deco features popular at the time. The main entrance hall has a dual staircase leading up the balcony, which overlooks the hall. Unusually, the building has cloisters that allow movement between classrooms without any adverse effects from the weather.

Internally, extensive use was made of parquet and terrazzo flooring, feature plaster and timber moldings. Skylights allowed natural light into the main entrance hall, and one of the science labs.

Alicia Gower-Jones wrote to Gilbert Wiles offering a plaster cast frieze of a section of the Elgin Marbles. She obtained this from the South Kensington Science Museum. This plaster work shows the Temple of Athena on the Athenian acropolis, and is from the Parthenon section (West Frieze Block 10). 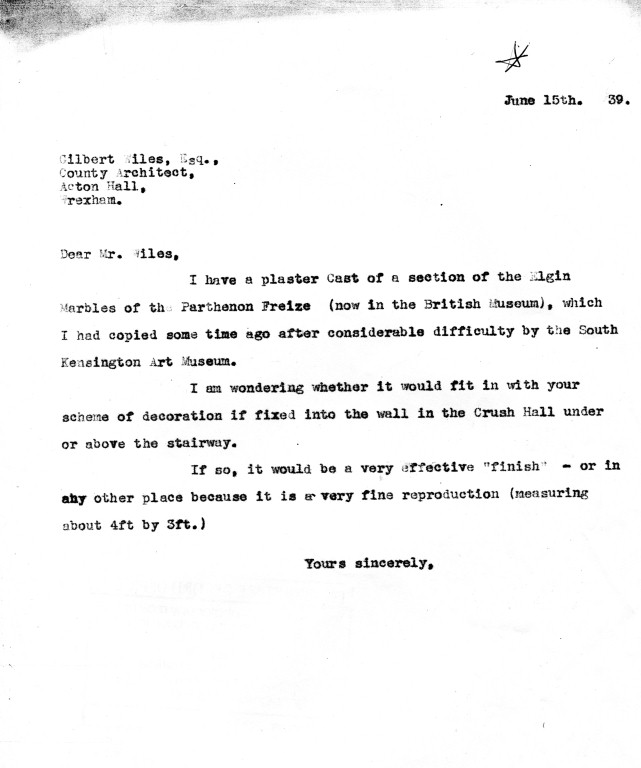 Externally however, a more conservative approach was taken by the architect. The red brickwork has a hand brushed finish, which was considerably more costly than conventional brick. The intricate herringbone patterns created using these bricks between the ground and first floor windows, are nevertheless, very attractive. 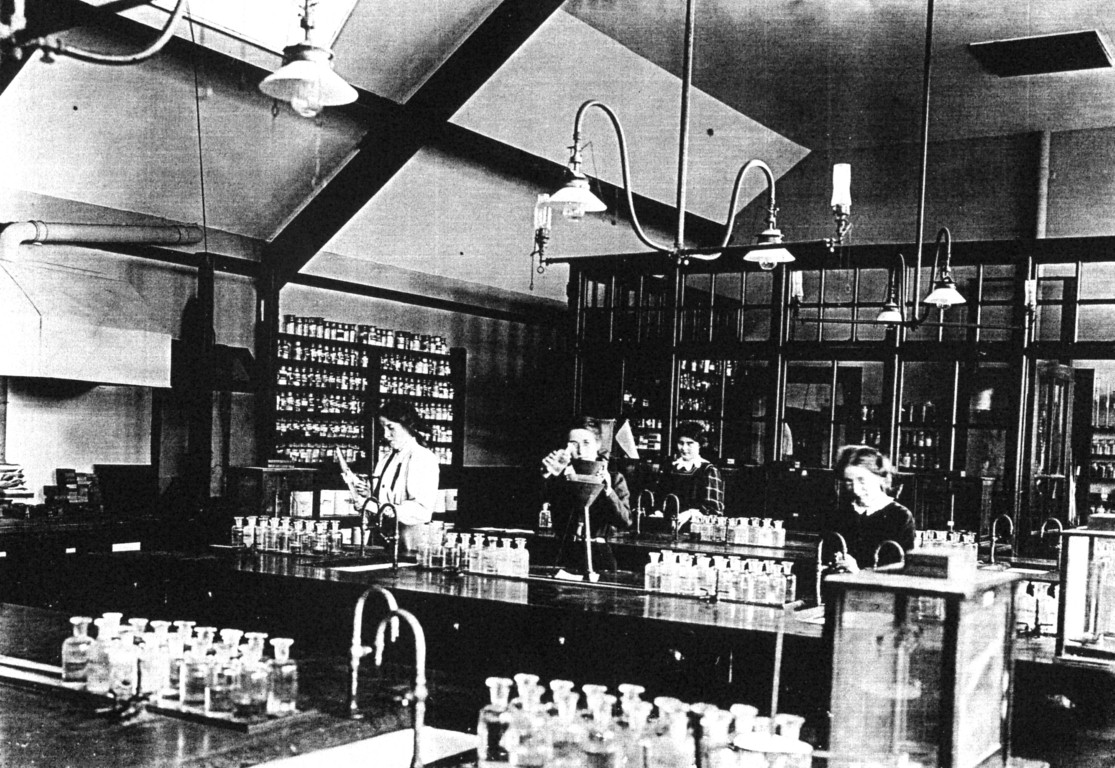 Whilst the building was being built, war broke out in the Pacific region. July 1937 saw the start of the Second Sino-Japanese War, which is considered the pre-cursor to World War II. In fact, the school opened to pupils the same month that World War II broke out (September 1939).

With war very much in the press, in July 1940, Gilbert Wiles sent a copy of the school plans to Emyr Williams, Clerk to the Governors. In the plan, he had detailed areas of the school that could be used as an air-raid shelter. Specifically, the four cloakrooms on the ground floor, along with their connecting corridors, which had reinforced concrete ceilings. These ceilings were further strengthened with timber propping.

He describes the area of shelter provided to be 3740 square feet, and at 4 square feet per scholar, there would be enough room for 935 scholars. He states that the cloakrooms are equal in all respects to a surface air raid shelter. One wonders if the architect decided to construct the ceilings with reinforced concrete knowing that war was imminent?

A few months later, Miss Gower Jones received a letter detailing the fire precautions that were to be put in place during the war. These consisted of a three person Fire Guard Team to be bunked in the schools Medical Room, along with one member of teaching staff per watch. Buckets, and ladders were to be provided at specific points around the building. A copy of this correspondence is here.

Both the Girls School, and Boys School across the road, played host to many young evacuees from Liverpool during the war. This caused considerable disruption to the curriculum, as pupil numbers soared, and the school became overwhelmed. Some subjects were dropped, and extra-curricular activities curtailed due to blackout restrictions.

The school became a comprehensive in 1972, and between this date, and when it closed in 2003, a number of other schools used the building whilst their own buildings were being renovated.

For the first ten years following it’s closure, the building sat uncared for, and had little use. After the more modern extensions were demolished in 2012, the site was closed and left totally unprotected.

Sadly, the water supply to the building was not shut off when the property was vacated, and a large water leak resulted in irrepairable damage to the parquet flooring in some areas. The building had no physical protection against the entry of rough sleepers and vandals, so has suffered greatly as a result. Finally, Wrexham County Borough Council fitted metal shuttering to the doors and windows, which to some extent, has mitigated any further vandalism. A case of “too little, too late” perhaps?

Structurally, the building is sound, and was going to be the basis of a proposal by Coleg Cambria to renovate the building and include it in their plans for enlarging their existing further education footprint within the town (see their plans on our Documents page), or visit the architects website (Ainsley Gommon) by clicking here.

Despite gaining planning permission to carry out the renovations and additional building work in November 2015, the Council withdrew the offer to sell a week later, citing it would require the land for it’s own use sometime after 2019.

As the Council had no plans or funds to maintain or develop the site, the Executive Committee voted in January 2016 to demolish the building, and the Council submitted a planning application to this effect, which was subsequently granted. At this point, Save Our Heritage was formed, and started campaigning to save the building. After many months of hard work, CADW awarded the building Grade 2 Listed status in August 2016.

However, Wrexham Council were not at all happy about this decision, and decided to challenge the listing decision by way of a Judicial Review. Unfortunately, it was found that the listing notice did not contain enough detail on the reasoning behind the decision to list the building, and the listing was quashed.

After a few worrying months, in November 2016, the Cabinet Secretary for Finance and Local Government, Mark Drakeford AM, re-considered the matter, and decided that the building should indeed be Grade 2 Listed.