Glyndwr University have made several planning applications this month (August 2018) as part of their Campus 2025 vision for the future of university level education within Wrexham.

One of the more significant applications relates to the former Denbighshire Technical College on Mold Road, also known in years gone by as NEWI (North East Wales Institute) or informally as "the Tech".

The building is prominently located on Mold Road, one of the main gateways into the town. It has been a noteable piece of Wrexham history for decades, since its construction in the early 1950's. In 1956, the architects (a Chester based company called Saxon, Smith and Partners) were awarded the Royal Institute of British Architects Bronze Medal for its design.

The building was awarded a Grade 2 Listing in January 1994.

The university want to demolish the former gymnasium to the rear of the building, and construct a large, new entrance pavilion in front of the current main entrance.

The request to demolish a large part of a listed building, and to construct a significant new structure in front of one of Wrexhams most well known landmarks must be subject to intense scrutiny. These changes are drastic, and in respect of the development on the front of the main building, somewhat out of scale and keeping with the simple and elegant form of the original architects vision.

The planning application consists of over 60 documents, including a heritage impact report and pre-application consultation. We have filterered these documents down to the just the ones we feel are most relevant, and more understandable by the general public. Links to thee documents can be found at the bottom of this page.

The new pavillion at the front of the building will be known as the Learing Gateway, and will obstruct the view of the original main entrance to the Plas Coch academic block. The University cite that disabled access is currently poor (but it is already compliant, as a two stage ramp was built many years ago). If this is the case, other solutions are possible.

The stone frieze-work by Darsie Rawlins (an Associate at the Royal College of Art) will be totally invisible unless one enters the new pavillion. The architects plans state that they have positioned the supporting pillars carefully inside the pavillion to minimize visual obstruction of the friezes, but in reality, the whole set of stonework won't easily be appreciated without the viewer positioning themselves at very specific points in the pavillion. 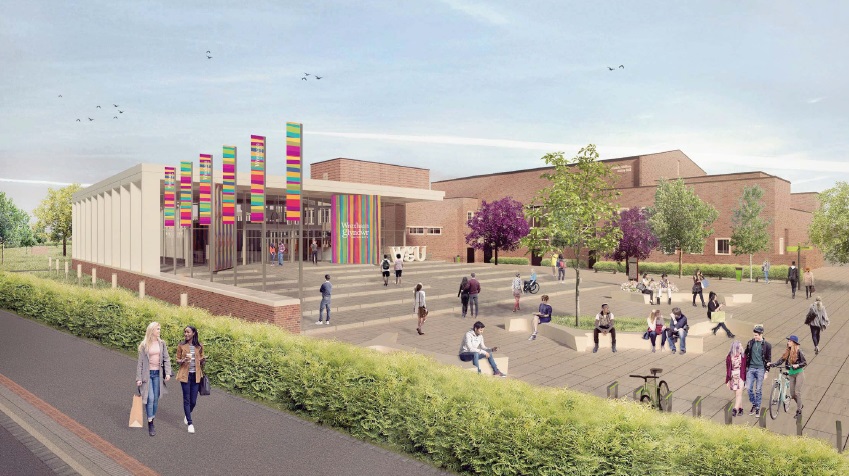 One of the other buildings scheduled for demolition is the Engineering Block at the rear of the building. Constructed mostly of concrete between 1967 and 1968, it has an interesting sculptural form to the roof, which is somewhat brutalist in it's implementation. As this Engineering Block is unlisted, it is likely that demolition will be approved, which is a shame because it has some unique qualities.

The proposal also mentions that the windows in the Plas Coch Academic building are in poor condition and need either repair or replacement. If replacement is the ultimate course of action, then it is essential that the correct style of window is selected. It is possible to specify steel or aluminium double glazed windows with narrow sightlines and glazing bars. Modern steel and aluminium window frames will outlast uPVC by many decades, and is actually a far better choice from an enviromental standpoint. Selection of such a window frame would complement the building, and remain true to it's original design.

Save Our Heritage, along with Wrexham Civic Society, and the Twentieth Century Society, submitted comments opposing the planned development at the Plas Coch campus. The Planning Department at Wrexham Council decided that Save Our Heritage and the Twentieth Century Society comments would not be made public, so we've made ours available by clicking here .